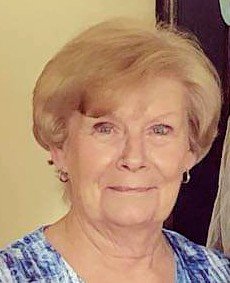 Mary Patricia Patterson (nee Campbell), was born in Belfast, Northern Ireland on March 13th 1949 and was the second of eight children born to Joseph and Catherine Campbell. Mary grew up in a traditional Irish Catholic household, the values from which she maintained throughout her life. As children Mary and her sister Kathleen lived with their grandmother and went to school together with their aunt Sarah always close by. As teenagers, the pair were inseparable and hung out in the same circle of friends enjoying roller skating in the Floral Hall, ice skating at the King’s Hall and movie nights at the local cinema in Belfast. The two sisters were always together and shared a special bond that remains today.

Mary left Northern Ireland in 1968 and immigrated to Canada starting a new life. She began her career working with INA insurance making fast friends with co-workers and went on a life-changing blind date with Peter Patterson, a young, dashing cadet officer and school teacher. Mary and Peter married in 1974 and settled in the North York neighborhood of Toronto remaining close with Peter’s parents Jack and Jessie Patterson of Cambridge, On. In 1977 Mary and Peter welcomed their first son, Sean Joseph Patterson and relocated to Scarborough. In 1985 they welcomed their second son Michael Ross Patterson and moved to Markham where they raised their family and became integral parts of the community. Peter worked as a French teacher at William Armstrong P.S. and Mary dedicated herself to raising their two sons and worked in the community supporting various important organizations; Elections Canada, Evergreen Hospice and in retirement joined the Markham chapter of the IODE women’s group where she spent nine years as the chapter secretary and Communications Officer active in all the chapter’s fundraising activities.

The Patterson family enjoyed time at home, events and activities in the community and Toronto area and vacations to Ireland, the US, the Caribbean, Mexico and road trips throughout Canada. Mary enjoyed knitting and anytime someone was expecting a child they could count on receiving a beautifully made baby blanket and sweaters for Christmas. She also knit gloves, hats and scarves for various programs such as Out of the Cold serving the homeless in Toronto and communities in Labrador through her work with the IODE.

Close friends describe her as someone they could always talk to, someone who’s humor could brighten up their day and make them feel better about whatever was going on. Someone who was truly interested in their friend’s family and how they were doing, a true friend.

As a mother, Mary was always there for her children and their friends. She encouraged them to follow their dreams and aspirations and her and Peter taught their sons the importance of family and kindness to others.

In February of 2020, she attained the proud title of Granny with the addition of Elizabeth “Ellie” Mary Gwendolyne Patterson born to Michael Patterson and his wife Lindsay married the previous year. Ellie was the apple of Mary’s eye and was a source of constant joy. Ellie carries both her Granny’s name and spirit.

Mary lived her life in good health but sadly and suddenly passed away on Friday January 29th 2021 with her son Sean by her side, reuniting with her husband Peter Patterson (dec. August, 2011). She leaves behind her two sons Sean, Michael, daughter-in-law Lindsay, granddaughter Ellie, and siblings; Margaret and Danny and their families in Canada; Martin and his family in New Zealand, and Kathleen, Gerard, Joseph and Bernard and their families in Belfast, as well as numerous close friends and connections made over a lifetime through her work and community involvement. She was a very special person to all and will be greatly missed.

In lieu of flowers the family requests donations be made to a local food bank in her honor.

Please click here to view the livestream of Mary's service

Share Your Memory of
Mary
Upload Your Memory View All Memories
Be the first to upload a memory!
Share A Memory
Send Flowers