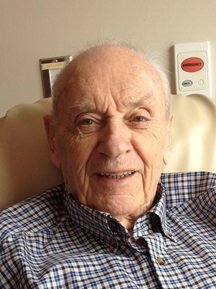 Alexander Williams died peacefully at  the age of 95 at Parkview Residence for Seniors in Stouffville, Ontario on Friday November 13th, 2020.

He lived almost 8 years following the death of his wife, Joyce ( nee Wright ), who died February of 2012. He was devoted to his family and is survived by his children, Deborah Austin,  Christopher Williams, Gregory Williams ( and wife Maria). He was a playful, loving and enthusiastic grandfather to Andrew, Elizabeth, Christopher, Brian, Dale, Alana, Natalie  and Daniel.

Alex grew up in a home  filled with brothers. He is survived by his brothers Gerald and David,  his sister in law Marcella and brother in law Joe Bator. He was predeceased by brothers Alfred, James, John and Louis as well as and sisters in law Eileen, Patricia, Sheila and Audrey.

Alex was an enthusiastic English teacher who loved reading and writing. His beloved character Vert Green and the bedtime stories he told  about him were wonderful gifts to the children in his life. He was an active member of St Patricks Parish in Markham and a community volunteer as President of Markham Minor Hockey, Chairman of the Markham Library Board and volunteer with  Vincent de Paul over the years.

Alex was a veteran of World War II, a member of the Queens Own Rifle and had stories to tell about his times in the army, the end of the war and the occupation and attending the Nuremberg trials for Nazi War criminals.

He lived through many moments in history during his 95 years, including the Depression, World War II, and now the Covid -19 pandemic.

A teacher to the end, he taught us an important lesson about living with dementia and dying with grace and dignity. We are proud of his example, from beginning to end. Despite his decline, he kept his humour and genuine affection for others, with glimpses of his old self,  to the very end.

With much gratitude to the staff of Settlers Terrace at Parkview Home, who cared for him with patience, kindness and love, including during recent times when Covid 19 prevented his family from being by his side. Special thanks to his friend, Stephanie Lanigan, who made a huge contribution to his quality of life in his final years. These front line workers are our heroes and we will miss them and the family of residents they care for.

Due to the current high risk Covid 19 status of York Region, his funeral and celebration of life will be postponed until May 2021, when safer options are possible.  In lieu of flowers, a donation to a charity of your choosing, or to Parkview Home, St Vincent de Paul or Rayjon Sharecare, as Alex cared.

Share Your Memory of
Alexander
Upload Your Memory View All Memories
Be the first to upload a memory!
Share A Memory
Plant a Tree