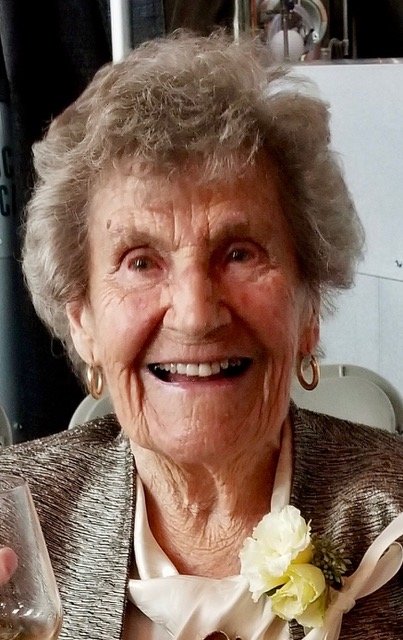 After an ice storm in the early 1960s left Montreal in the cold and dark for a few days, Irene Aagaard shrugged it off and found something to cook in the fireplace of the family home on Lake Avenue.  The moment was a window to her character: Every problem had a work-around, and humour often lit the way to a solution. Get up when you're down. Move forward. Hanna Irene Aagaard passed away from pneumonia on April 19 at Markham-Stouffville Hospital, in her 96th year, the last of several siblings born to Theodor and Agnes Marie Wennberg in Tromso, Norway.  She is lovingly remembered by sons Arne Kim (Gail), Eric (Willow) and Christian (Laura Manning); grandchildren Lindsay (Blair Stransky), Karen (John Little) Tom (Kristy Colasante), Sally (Mike Peterson), Evan (Laura Borrelli) and Alan; and great-grandchildren Charlie and Ned Stransky. Also fondly remembered by many nieces and nephews in Canada and Norway. When she was eight, Irene sailed to Canada with her mother, two sisters and two brothers to join her father who had established a photography business in Vancouver, B.C. She couldn't speak a word of English. By the time she finished high school she was ready to enrol in a secretarial program.  During the Second World War, the Canadian government and the Norwegian government in exile set up Little Norway, a training base in Toronto and Muskoka for Norwegian airmen. Responding to a national call for Norwegian-speaking residents, Irene enlisted and worked in the clerical pool. She dropped her purse at a dinner party one night, and met Arne Aagaard — a dashing navigator with the Royal Norwegian Air Force — when they both stooped to pick it up. They married in 1946. After briefly making homes in Oslo, Norway, London, England and Vancouver, B.C., they settled in the West Island of Montreal, where they raised three children, gardened enthusiastically and enjoyed the lively company of a wide circle of friends. Widowed in 2004, Irene moved to the Toronto area to be closer to her family. While she occasionally fussed about memory lapses and her loss of vigour in later years, she never wasted time in disappointment or despair, and never lost the friendly wit that endeared her to so many.  "I've had a good life," she would often say. As her life drew to a close, she recalled a line from an old song; “Non, je ne regrette rien."  Special thanks to the outstanding staff at both Sunrise of Unionville and Chartwell Hollandview Trail. And to the wonderful doctors, nurses and other health-care professionals at Southlake Regional Health Centre in Newmarket, and Markham Stouffville Hospital. A private family ceremony will be held at a future date. In memory of Irene, please consider donating to the Alzheimer Society in your community; or to The Norwegian Church Association, 5065 Rue Sherbrooke, Lachine. Que., H8T 1H9.

Share Your Memory of
Hanna
Upload Your Memory View All Memories
Be the first to upload a memory!
Share A Memory
Plant a Tree