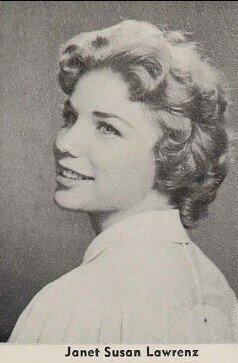 Janet (Jan) Ridabock passed away peacefully on Aug 17, 2022.  She was a beloved sister, mother, and grandmother who will be forever in our hearts and will be missed greatly.  She is survived by her her two sisters, Carol and Bonnie, her son, Christopher, his wife Ivy and her grandchildren Georgia, Ellie, and Morgan. Our family would like to say a special thanks to Jan's personal caregivers, Josie Peralta, plus the wonderful staff at Markhaven Seniors Home who cared for her at the end of her life.  Janet Susan Lawrenz Ridabock was born in Detroit Michigan on Nov. 10, 1943.  Her family moved to St. Petersburg, Florida where she grew up and where her sisters still live.   She loved to travel and worked in the airline industry living in New York.  She met and married Christopher Ridabock Sr. with whom she shared a son, Chris Jr. Janet and Chris divorced and after living in New Hampshire for a few more years, Jan moved back to St. Pete where she worked in Pharma sales, the Contractors and Builders Association, then later coordinating training for Florida Power.  Janet's love of travel brought her to far away places such as Machu Pichu, Peru, China, and Turkey.  She moved to Toronto in 2001 to be with her son and new wife where she watched their family grow and made new friends along the way. Janet's Celebration of Life will be held at Dixon Garland Funeral Home 166 Main St. North, Markham on Saturday, Aug. 20, 2022 from 4:00-6:00 p.m.  Please use entrance at the rear parking lot for direct access to the reception room.

In lieu of flowers, we ask that you consider giving a gift/donation to The Alzheimer's Society of Canada in Jan's memory.

Share Your Memory of
Janet
Upload Your Memory View All Memories
Be the first to upload a memory!
Share A Memory
Send Flowers