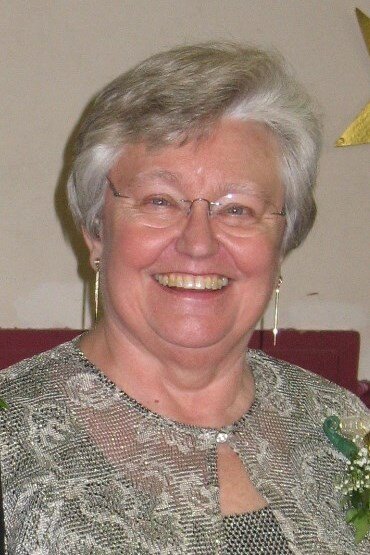 It is with sadness that we announce Gwendolyn Marie Patton, age 86, entered Heaven holding the hand of her loving husband on the morning of December 19. She was the beloved wife of Bud Patton for 64 years and cherished mother of Lorie Andrews (Mike) and Lynne Hutchinson (Gregg) who predeceased her.  As a mother she was generous and kind. She was thrilled to become a grandmother to Lyndsay (Ivan), Spencer, Tamara and Alanna and a great-grandmother to Tegan and Nora. Gwen was also a treasured Aunt. Gwen was influenced by her family to be a loving and caring woman, always giving of her time to others. She was a teacher and had a passion for celebrating and decorating for special occasions. She loved spending time with family – particularly her grandchildren. Gwen researched genealogy and was an avid photographer and seasoned traveller. Faith was important to her and she collected over one thousand nativities, some of which were needlework crafted by her capable hands. Predeceased by her brother and his wife, Howard Harrison (Marg), she will be greatly missed by brothers-in-law Wayne Patton (Penny), Gary Patton (Yvonne), Glen Patton (Laura) and niece Shirley Corras (Rick) and nephews David Harrison (Gloria), Don Harrison (Lisa), Dana Patton (Krysti), David Patton (Carolina), Joshua Patton (Sabrina), Cameron Patton (Diana) and their families. She will also be missed by other relatives and close friends and her grand-dogs. Private family burial will take place in January. There will not be a funeral. The family’s wish is to have a Celebration of Life at a future date.

Share Your Memory of
Gwendolyn
Upload Your Memory View All Memories
Be the first to upload a memory!
Share A Memory
Send Flowers