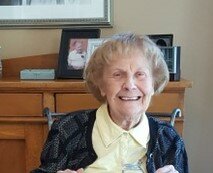 It is with deep sadness that we announce that Kathleen (Kay) Lewis passed away peacefully at the Markham-Stouffville Hospital on Sunday, December 12, 2021 with her family at her side.   Kay was predeceased by her beloved husband Eric (2013) and leaves behind her loving children, Patricia Neil (Jerry) and Malcolm (Megan Johnston), and her adored grandson, Tyler Neil (Lauren Cardoza).  She was predeceased by her five brothers and one sister, and is lovingly remembered by her sister-in-law in England, Sylvia Keen, as well as numerous nieces and nephews in England and South Africa.

Kay was born on February 21, 1923 in Stoke-on-Trent, England.  During WWII, she served in the Women’s Auxiliary Air Force as a Sergeant.  Following the war, Kay worked as a secretary at Keele University until her children were born, and she had many fond memories of this time period and made a number of lifelong friends.  During the mid-sixties, Kay and Eric and their young children immigrated to Canada, initially settling in St. Catharines where Eric had obtained employment as a mechanical engineer for General Motors.  They stayed in the Niagara Region, moving to Niagara-on-the-Lake and then Vineland for a number of years prior to moving to Stouffville to be closer to their family.  For the past 6 years, Kay has resided at Amica Swan Lake, Markham, and until recently was able to live quite independently.  A private family memorial service will be held on Friday, December 17.  If desired, donations may be made to Markham-Stouffville Hospital  at Make A Gift - Markham Stouffville Hospital Foundation (convio.net) or War Amps at Donate Today | The War Amps in memory of Kay. The family wishes to thank the caring staff at Amica Swan Lake for the support they have provided Kay, Dr. Jeff Weissberger,  and the nurses and physicians at Markham-Stouffville Hospital. Online condolences are welcomed at www.dixongarland.com

Share Your Memory of
Kathleen
Upload Your Memory View All Memories
Be the first to upload a memory!
Share A Memory
Send Flowers