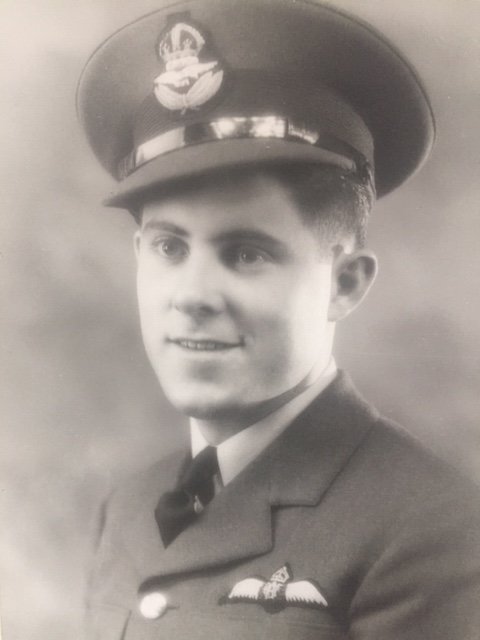 At Sunnybrook Veterans Centre Toronto, on Thursday July 9th, 2020, Harvey in his 98th year peacefully entered God’s presence. Harvey was the beloved husband of Marilyn (nee Moreland, Manson) for 18 years and will be missed by her children, Lori, Sandra and Doug. He was predeceased by his first wife Evelyn (nee Potter) for 55 years and mother of his children. Harvey was a dedicated father to Judy Bowler (Ken) and his son David and was sadly predeceased by his other son Mark. He was the proud papa of his grandchildren, Jennifer Bowler and Jeff Bowler (Jilayne) and Steven Patterson. He was great-papa to Kenny Bowler. He was a special papa to the Troung family, whom he and nana (Evelyn) lovingly sponsored from Vietnam. Born in Hamilton to Harriet (Harvey) and John Patterson, he was the eldest of three siblings. His brother Jack (Barbara) predeceased him earlier this year. He is survived by his younger sister Eleanor Kucharsky (Gene). Harvey volunteered to serve as a WW2 Pilot RCAF 121 Squadron after completing secondary school at Delta in Hamilton. Following WW2 he joined his father in his furniture business on Ottawa St. in Hamilton - J.E. Patterson & Son Ltd. He directed that venture for almost 50 years. He was a Rotarian and secretary of the Credit Bureau of Southern Ontario for more than 25 years. During his retirement years, Harvey spent many enjoyable hours with the team at the Canadian Warplane Heritage Museum, rebuilding the Bolingbroke WW2 aircraft he had flown in his RCAF years. During his lifetime, he gave his time effortlessly to Youth for Christ, World Vision of Canada and Men for Missions in Ecuador, South America. He was very involved at Park Bible Church in Burlington where he was a member for 60 years. More recently he became a member along with his wife Marilyn at Central United Church in Unionville. A very special thanks to the medical and support staff at Sunnybrook Veterans Centre for their exceptional care and devotion to our father and husband. A family service and internment has taken place at Woodland Cemetery in Hamilton. Expressions of sympathy can be made by making a donation to Sunnybrook Veterans Centre, donate.sunnybrook.ca or World Vision Canada, donate.worldvision.ca. Condolences may be left at www.dixongarland.com

The family had a private graveside service on Tuesday July 14 at Woodland Cemetery in Burlington, ON.

Share Your Memory of
Harvey
Upload Your Memory View All Memories
Be the first to upload a memory!
Share A Memory
Plant a Tree