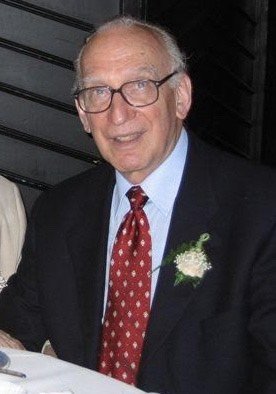 It is with deepest sorrow that we say goodbye to Robert (Bob) Burrell in his 94th year, husband of 66
years to Marianne (nee Brant); father to Robin Halbert (Gary), Peter Burrell (Carol Cartier), John Burrell,
Laurie Stevenson, and Sheila Batarla; grandfather to Regan, Erin and Alison Halbert; Cassiopeia and
Nicholas Burrell; Amy and Lindsay Batarla; and Michael Stevenson.  Freed from the ravages of
Alzheimer's by the scourge of COVID-19.  He will be forever loved and remembered.
Graduating with Distinction from the University of Saskatchewan in 1948 as a chemical engineer, Bob
joined Canadian Industries Limited (C-I-L) where he would eventually spend 42 years and specialize in the production of chlorine for use
in the pulp and paper industry.  Moving regularly as he accepted increasingly challenging positions with
the company, he was transferred from Windsor to Hamilton, ON (where he met his wife Marianne), to
Dalhousie, NB, to the head office in Montreal, PQ, and eventually to the new head office in North York.
Hard working and highly intelligent, he became a recognized world expert in the production of industrial
chemicals and was asked to travel extensively internationally as a representative on both commercial and
diplomatic trade missions, eventually becoming the president of the Chlorine Institute.  His last position
was as &quot;Big Bird&quot;, Manager of Emergency Planning where he coordinated the creation of the
transportation emergency response capability, we see on the highways today in response to the
Mississauga train derailment.  Bob was the recipient of many industry and international awards.
A lifelong patron of the arts, he instilled his love of music and theatre to all his kids.  He spent over 25
years participating in numerous amateur Gilbert &amp; Sullivan productions in both Montreal and Toronto, and
upon retirement switched to barbershop where he sang in several international competitions as a
baritone/bass with the Dukes of Harmony (where he was Barbershopper of the Year in 1999 and elected
to the Hall of Fame in 2000), the Barons of Barbershop, and finally with the Suburbanaires Barbershop
Chorus.  Bob also enjoyed collecting stamps, was president of the Lakeshore Stamp Club in 1972/3 and
produced several award-winning exhibits.  In retirement he began collecting Moorcroft pottery which gave
him and Marianne ample opportunity, and an excuse, to get out and travel around southern Ontario
attending antique shows. Bob was a kind, caring and loving soul with a tremendous sense of humour, always ready with a quip or
to break into a surprising appropriate song at any occasion.  He will be truly missed by his family and all
who knew him. Donations to honour Bob may be made to the Alzheimer's Association, River Glen Nursing Home in
Sutton, ON, any COVID-19 Relief fund, or any organization that supports the arts he so dearly loved.