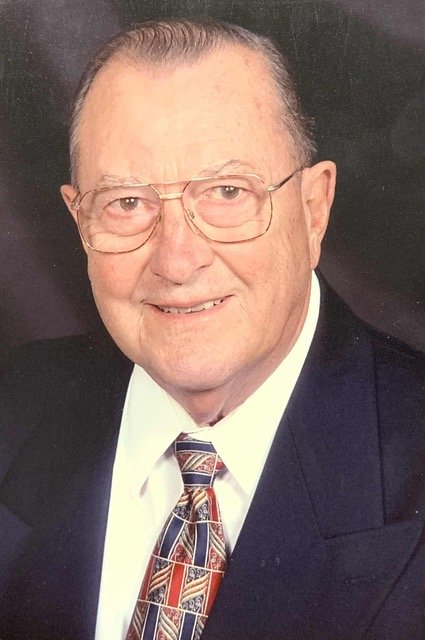 John William George Westbrook on January 27 at Georgian Bay District Hospital, Midland. Loving husband of Elizabeth “Tib”, formerly Tib Tulley, née Perry. Loving father of Heather (Bob) and step father to Christopher Tulley (Joan). Loving grandfather of Sarah and Laura Tulley (Chris) and Jesse (Jen), Kenneth and Hannah Hallsworth. Great grandfather of Jayne Lepp and Nicholas Hallsworth.
John is survived by his sister, Gloria Gregory of Montreal, and many nieces and nephews from both sides of the family who were very special to him. Born in Montreal and always a Montrealer at heart, he loved his Habs and Alouettes.
John attended Strathcona Academy, and served in the Canadian Armed Forces before attending McGill University and the University of Toronto where he graduated from OCE as a teacher in 1950, and later obtained his Master of Education. John had a very successful career in public education with the Forest Hill and Toronto Boards of Education, and served as principal of Parkdale Collegiate and Bickford Park Secondary School.
John had many passions and talents. He was an accomplished writer, having published both a book of short stories and a book of poetry. He loved to fish and had done so all over the world in oceans, pristine lakes, and the many salmon rivers of his beloved Gaspé. The summer home in the Gaspé, which he and Tib had built, was no doubt his favourite place on earth, and even recently he was scheming as to how he might get down one more time.
John loved music, both as a performer and listener. He sang in the McGill Choral Society, and in church choirs in Montreal, Toronto, Unionville and even in Florida during winter vacations. He was an avid collector of music, from classical to Dixieland, often accompanying the latter with his thumping bass “gut bucket”. He loved family and small gatherings of friends where good conversation could occur.
He was a man with a strong social conscience and a generous supporter of his many churches and other causes.
A Celebration of Life will take place on Friday, February 7 at 11:30 a.m. at St.Philip’s-on-the Hill, 9400 Kennedy Road, Markham. Visitation thirty minutes prior, and reception to follow.
Memorial donations may be made to Georgian Bay General Hospital, Midland or St. Philip’s-on-the-Hill, Markham.