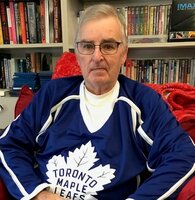 O’BRIEN, DANIEL PATRICK December 24, 1942-October 17, 2021, died peacefully in his home.  He is predeceased by his wife Judith Ann O'Brien (nee Russell) who he now joins in Heaven.  The two met at the Winnipeg Ski Club over a shared love of downhill skiing and scotch and shared a 40-year friendship and over 35 years of marriage.

Dan will be missed by his family, daughter Christine Lipsius and husband Eric and their boys Jude and Isaac who were the light of his life. His sisters Pegy and Jaci and Nora, and brother Kevin and their families feel his loss, as do the families of his sisters Pat, Shiela, Judy, and Brenda who predeceased him.

Dan was a long-time employee with IBM, which brought him to Markham from Winnipeg in 1985. He started out selling typewriters went on to sell personal computers and phone systems across the Toronto area. A lifetime sports fan, Dan picked up golf at the IBM Country Club in Markham and became director of Men’s golf at the club. Golf was an activity that he and his wife Judy loved to do together and with the friends they made over their years in Markham. Perhaps one of their happiest experiences was the first time they acted as marshals for the Canadian Open at Glen Abbey and he met some of his golf idols for the first time.

Donations to the Canadian Cancer Society in lieu of flowers would be appreciated.