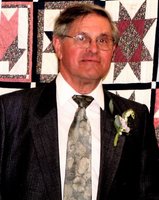 George Reesor passed away peacefully at home surrounded by family members on August 11, 2021, at the age of 87 following a short but courageous battle with cancer.

George was born October 29, 1933, in his family home in Scarborough, ON, a welcome companion for his older brother John.  Childhood memories included walking 2½ miles daily to Hillside Public School, a one-room schoolhouse.  George loved to entertain his children with stories of he and John spending hours playing in the farm bush along with their faithful dog “Sport”.

During the mid-1950s, his local Mennonite youth friends developed a bond with peers in Mahoning Co., Ohio and before long a special young woman caught his eye. George summoned up the courage to ask Anna Weaver to skate with him on a local pond.  While skating, Anna tripped on the ice, resulting in his classic line of “she fell for me”!  They were married in May 1957 and three children followed:  Louise (1958); Ernie (1960); and Dale (1963).

In 1968, George purchased a farm property on McCowan Rd, Stouffville, on which he fulfilled a lifelong dream of building a large pond.  This brought enjoyment to his children, grandchildren, friends, and neighbours. Also, it provided almost unlimited opportunities for birdwatching, a life-long interest of his.

In September 1987, an unfortunate farming accident resulted in the loss of George’s right arm.  Following his recovery, he became a source of incredible inspiration to his family and others with his perseverance and ingenuity in finding ways to do tasks and maintain his beautiful property with only one arm.  He built hundreds of intricate decorative birdhouses that would have challenged the skills of most fully able-bodied woodworkers!

George was a man of many talents and active interests.  In 1970, while still farming, he enrolled in a liberal arts program at Richmond College, graduating with high standing several years later.  He described this education as allowing him to expand his world view “from a peep-hole to a picture window.”  Other lifelong interests included astronomy, archeology, and geology.

George lived out his strong faith in God and was involved in many church ministries throughout his life. He was actively interested in Mennonite history, writing and publishing three books: “Conversations with My Parents” (2006), “Over Mountains and Valleys” (2009), and “Conversations with My Children” (2012).  The 2009 publication was the largest and most ambitious of these, representing a compilation and translation (German to English) of letters between Mennonite community members throughout Canada and the U.S. from 1859 – 1915.

In summary, George experienced a fulfilling life that was a blessing to those around him and he succeeded in making the world a better place for all.

In lieu of flowers, donations can be made to the following: